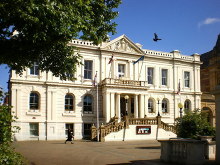 Want to advertise on this website? Create your advert now.

Whats Wrong with the Road Map

HOPE FOR TODAY
IS A WEB SITE OPERATED BY DAVID HOCKING, A PASTOR AND WELL KNOWN SPEAKER IN THE STATES AND WORLD WIDE. He has a remarkable understanding of Biblical Prophecy and is an excellent communicator. A link to his site is available on our 'Home page'

WHAT'S WRONG WITH THE ROAD MAP?

The prophet Ezekiel spoke these prophetic words about 2500 years ago against the so-called "prophets of Israel" who would "follow their own spirit" (13:3) and "have seen nothing." Ezekiel 13:10 says: "they have seduced My people, saying 'Peace" and there was no peace."

Psalm 83:1-5 is a prayer to God that says: "Keep not silence, O God; hold not Thy peace, and be not still, O God. For, lo, Thine enemies make a tumult; and they that hate Thee have lifted up the head. They have taken crafty counsel against Thy people, and consulted against Thy hidden ones. They have said, 'Come, and let us cut them off from being a nation; that the name of Israel may be no more in remembrance.' For they have consulted together with one consent; they are confederate against Thee."

Representatives of the European Union, the United Nations, Russia, and the United States (a group known as "the Quartet") issued a statement on September 17, 2002, regarding a "road map" for peace that would shape international policy toward resolution of the Israeli/Palestinian conflict in the Middle East. The latest version of this "road map" was announced on April 30, 2003, and published with the date of May 1, 2003. The announcement followed the election of Mahmud Abbas (Abu Mazen) as the new Prime Minister of the Palestinian Authority. He pledged to end terror and chaos and to work for a negotiated peace.

The destination of this so-called "road map" is to establish an independent, democratic, and viable Palestinian State living side by side in peace and security with Israel and its neighbors. This "road map" promises to end the so-called "occupation" that began in June of 1967. This principle of "land for peace" follows the United Nations Security Council Resolutions 242, 338, and 1397, and is clearly a follow-up plan to the one proposed by Saudi Crown Prince Abdullah and endorsed by the Beirut Arab League Summit in the fall of 2002. This "road map" calls for the acceptance of Israel as a neighbor living in peace and security. It is proposed in several phases. Phase one is the ending of terror and violence, normalizing Palestinian life, and building Palestinian institutions. This was to be completed by May of 2003. Phase two is the creation of an independent Palestinian state and was to be accomplished from June, 2003, to December of 2003. Phase three involves negotiations between Israel and the Palestinians leading to what is called a "permanent status agreement" by 2005, thus ending the Israeli/Palestinian conflict and bringing a realistic solution to the refugee problem and a final resolution on the status of Jerusalem that protects the interests of Jews, Christians, and Muslims worldwide, and international recognition and acceptance of a new Palestinian State within Israel's present borders.
Under pressure from the United States, the government of Israel under the leadership of Prime Minister Ariel Sharon voted on May 25, 2003, to accept the "Road Map" and made it contingent upon 14 "comments" that Israel submitted to the Americans. The exact wording of this resolution was: "The Government of Israel, resolves that all of Israel's comments, as addressed to the US Administration's statement, will be implemented in full during the implementation phase of the "Road Map." Prime Minister Sharon emphasized the importance of these 14 reservations and called them "red lines beyond which we cannot and will not withdraw."

At the Annapolis Conference in late November of 2007, the "ROAD MAP TO PEACE" was once again put on the table of negotiations between Israel and the Palestinian Authority. The present government of Prime Minister Ehud Olmert has forsaken Biblical teaching and the will of the people and is operating as though they have full authority to act. This next week US President George Bush and Secretary of State Condoleeza Rice will be traveling to Israel and will be attempting to enforce the demands of the "ROAD MAP" upon both parties - Israel and the Palestinian Authority.

SO, WHAT'S WRONG WITH THIS "ROAD MAP"?

It DECIDES the destiny of Israel without consultation with Israel itself. The United Nations is the coalition of nations that has been consistently hostile to Israel and passed the resolution equating "Zionism" with "racism."
It DISAGREES with the promises made by international agreements concerning a homeland for the Jewish people.
It DECEIVES the world concerning the true identity of the Palestinian people. There is no Palestinian culture or language, and before 1948 no one ever heard of such a thing. The name "Palestine" was given to the land of Israel by the Roman Emperor Hadrian in the second century AD after the final Jewish revolt. It was designed to be a derogatory term and was chosen to reflect the name of Israel's ancient enemies, the Philistines. Ever since, there has been a Jewish population in this land that in the technical sense would make them "Palestinians." The PLO, the Fatah, the Islamic Jihad, the Hamas, and others like them are terrorists. Yassir Arafat himself was an Egyptian. It was the land of Jordan that was to be a homeland for the Arab Palestinians. This land was never called "Palestine" before the second century AD. Even the Christian New Testament makes it clear in Matthew 2:21 that the name of this land was "Eretz Yisrael" the land of Israel.
It DISTORTS the truth about the war of 1967 and uses emotionally confusing words such as "west bank" and "occupied territories" to make people believe that Israel was the aggressor. On the contrary, Israel was attacked by Islamic nations bent on her destruction. These Islamic nations of the Middle East never refer to Israel by its correct name. They call 1948 "the Great Disaster" and have said over and over again that if Israel continues to exist as a nation in this land then Islam is not true and authentic as a religion of Divine revelation. The prophet Jeremiah makes it clear (Jeremiah 31:35-37) that God's covenant with His people means that Israel will never cease to exist as a nation and that God will never forsake them.
It DELIVERS nothing to the people of Israel accept the promise of "peace" if they will give up land to the Palestinian Authority. This has been tried many times and is a totally failed policy! Terror and violence continues. In the past few years over 1000 Israelis have been killed by violence and many more wounded while talk of "peace" pours out of the mouths of Israel's enemies. If these attacks happened in America and the percentage of those killed was the same, there would be 40,000 Americans killed and thousands more wounded! Would we be asked then to make peace with our killers? Israel has a God-given right to defend itself against terror attacks, and it is extremely hypocritical for any nation to ask them to do otherwise!
It DISREGARDS the size and ability of many Islamic nations who could easily accept the Palestinian Arabs into their culture and countries. Some of them have made it clear that they do not want them. The goal is not the benefit of the suffering Palestinians, but clearly it is the destruction of Israel to which they are committed.
It DEMANDS the end of Jewish settlement in Judea and Samaria which historically have always belonged to Israel. No settlements were ever built on Arab land. Any land appropriated for military security purposes was purchased and families relocated with compensation.
It DENIES the validity and authority of Biblical history and Divine command concerning this land.
The word "land" appears 1717 times in the Bible. The phrase "the land of Israel" appears 31 times. The words "the land of Canaan" appear 66 times and the Bible makes it clear that this land was given to the children of Israel (Numbers 13:2; Deuteronomy 32:44)

The dimensions of the land were determined by God Himself. Genesis 15:18 "In the same day the LORD made a covenant with Abram, saying, 'Unto thy seed have I given this land, from the river of Egypt unto the great river, the river Euphrates."
The deed to the land belongs to God Himself. Leviticus 25:23 "the land shall not be sold for ever; for the land is Mine; for ye are strangers and sojourners with me"
The desire for the land is in the heart of God. Deuteronomy 11:12 "a land which the LORD thy God careth for; the eyes of the LORD thy God are always upon it."
The descendants to whom God gave this land are the children of Abraham, Isaac, and Jacob Genesis 12:7; 13:15; 15:18; 17:7-8, 18-19; 26:3;28:3-4, 13-15; 35:11-12; 48:3-4; 50:24
The disobedience of God's people did not forfeit their right to the land. Leviticus 26:40-45; Deuteronomy 30:3-5; Jeremiah 16:15; 31:10, 35-37
The decision to give the land to Israel was based on an everlasting covenant. I Chronicles 16:15-18; Psalm 105:8-11
The dwelling of Israel in the land in the future is clearly predicted in Bible prophecy. Ezekiel 37:11-14; Zechariah 12:1-10
The determination of nations to remove Israel from its promised land will not be successful. Amos 9:14-15
The final destiny of the land is in the hands of the Lord God of Israel. Ezekiel 39:25-29"they shall dwell safely in their land"
To every believer in the Bible's authority, authenticity, and reliability, the "Road Map" is facing the wrath of Almighty God! It is not based on truth, but lies that have been fabricated over and over again by Israel's enemies. Eretz Yisrael belongs to Israel! The "Holy Land" was given by God to the children of Abraham, Isaac, and Jacob, and nothing that any nation or political negotiation or military effort will try to do will never thwart the purposes of the Lord God of Israel for His people and His land!

This email was sent to xxxxxxxxxxx, by editor@hftm.org
Update Profile/Email Address | Instant removal with SafeUnsubscribeâ„¢ | Privacy Policy. Email Marketing by

This Microportal is built on the 2day Microportals platform which provides you with 3 click access to local and global information crucial both to your personal and working life. The platform provides live local data on transport, what's on, accommodation, eating out, shopping, sport, religion and weather as well as comprehensive reference and resource sections including TV, radio, online shopping, route planning, health, education and more.